Here's a Little Something No One Told You

Milestones are things to be celebrated. In our culture we have only a few of them high school graduation, marriage, parenthood, (divorce), and death. Other cultures have a transition milestone where one leaves childhood behind and walks forward into adulthood. Expectations change. Responsibilities change. Relationships change. In western culture we have sort of lost that moment where we separate childhood from adulthood.

For many queers and debutantes it is coming out that serves that purpose. With the exception of the Jewish Faith, I can not think of a single other group in the west that pinpoints the moment of transition quite so specifically. We've all celebrated a milestone birthday and awoke feeling exactly the same as we did the day before. The expectation that one will wake up and be a totally new person or feel completely different after a single day or event has passed usually doesn't happen. Brides don't wake up feeling like a whole different person. I didn't suddenly feel like a man the day after I started testosterone therapy, nor after my top surgery (though that was very liberating) and I didn't wake up feeling any more or less like myself after my hysterectomy.

So how do we become adults, husbands, or parents? How do we pinpoint the time/day/moments when we cross over those lines and leave something behind to step into the role of being someone new or different. How does a transexual finally realize their true identity as a man or a woman?

After my hysterectomy in February, reality hit me hard. It was sort of one of those moments that draws a definitive line between the before and the after. There is no going back, no changing my mind, no second guessing or correcting a hysterectomy. For better or worse, for right or wrong the deed is done and I have to live with the consequences of my decisions. Honestly, I don't make that many life-altering decisions, I am a creature of routine.
I thrive on knowing for the most part how my day/week/month is going to play out. I get frustrated when I feel like I have no control over what is going on in my life whether or not it something I can control. And I have to work on that because when I feel like I don't have control I get bitchy.

After my hysterectomy I lived on my couch for about 2 days and spent a lot of it swinging between feeling terrific before panicking and crying my eyes out. Some of it was likely hormones sorting themselves out once again, as well as the stress relief of having the surgery over with but I think it was more the idea that I had drawn a line across my life that would forever seem to separate it into two halves: the before and the after. The girl/woman I was and the boy/man I am becoming. 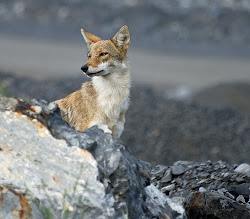 So, what's with the Coyote?

Coyote is a great teacher and while he is usually singled out as a trickster, the lessons he teaches others are invaluable. He is a great spirit capable of transformation embodying elements of both male and female, animal and human. 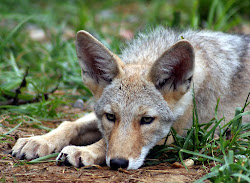 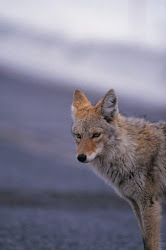 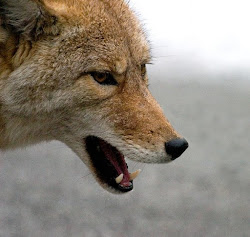 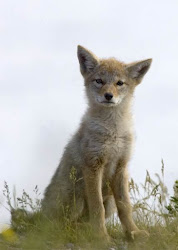 If one of your photos appears on this site please contact me so I can link it to your webpage.
Thanks